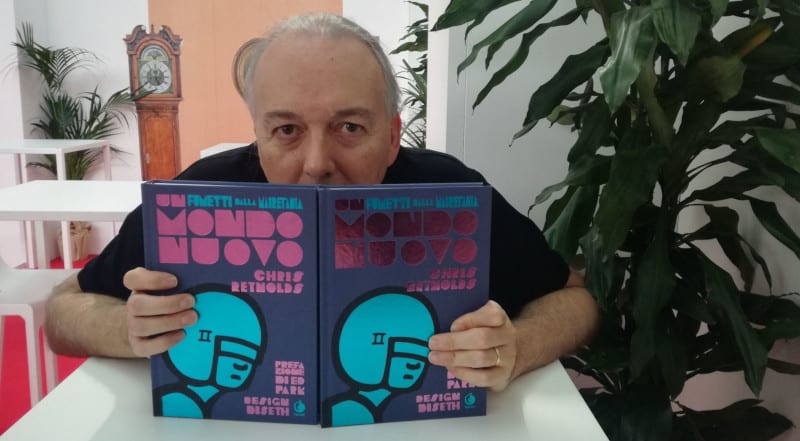 We reach out at Chris Reynolds to talk about "A New World:Comics from Mauretania", his influences and his career.
Comments

Admired by Seth and Paul Garvett, Chris Reynolds and his comics were almost completely unknown to the Italian audience. Thanks to the publication of the Italian edition of A New World: Comics from Mauritania by Tunuè, Chris Reynolds was one of the most awaited authors at BilBolBul 2019. We therefore took the occasion to discover his work, his career and his future plans.

Hi Chris and thanks for your availability. I would like to start from a statement that Seth made about your work and that really hit me: he defined you as “one of the most undervalued comic book artist of the last 20 years”. What do you think about this definition?
My comics have suffered in a way because even anyone who really liked them was unable to describe what it was about them that they liked. Someone once said that Mauretania was “indescribable in terms of others of its kind.” And so even now, a reviewer has to talk about a “space war” that features in one of the stories as being what the comic is “about”. And so I think that this difficulty of description was one reason for their slow acceptance.
In my opinion, Seth is the one who is best qualified to talk about what my stories are about. He has accurate insights into the stories and has described them as well ans anyone can.
When the New York Review Comics edition was suggested by the publisher, I felt very excited but also very scared. I felt that this might be a last chance for my stories to get noticed, and so I spent most of 2017 terrified that something would go wrong and stop publication. I still felt this way until I realised the book had been reviewed favourably in The Guardian newspaper, in The Times Literary Supplement and In the New Statesman and also that the book had earned back its advance. Then I felt I had been given what I really wanted and so I could relax. This was “True North” for me. and so anything else was an extra.

How did the idea of Mauretania come to you, and why did you chose to self-publish this story?
When I was 14 I began typing my first prose novel. I extended it and wrote new chapters until I was about 19. It was like a big assembly of ideas. Never finished. Then I went to art college, had influences like Edward Hopper and Tarkovsky. and this all crystallised in 1984 when the video company I worked for closed down and I began to have serious thoughts about doing comics.
My friend Paul Harvey and I had produced full-colour single-copy comics at college using gouache paint, Paul’s “Aspiro” and my “Airport” comics. These had pop-art influences but also they began to develop certain atmospheres and feelings that really interested me. I was a painting student at college but I began to find comics, with their narrative aspects, a more effective way of conveying what I thought I wanted to say.
You can see where this is going: After the video company closed, I thought I might sell a newspaper strip or something. But then I found that my ideas would have to be less grand. And so, with Paul Harvey, we started Mauretania Comics as a photocopied comic in 1985. It felt important to me to carry on, as I felt I now had a strong medium for my ideas and that now was the time to do it.

What are the most important influences, both from literature and art, that influenced your work?
An important spark was an exhibition of back & white photographs at the Mostyn Gallery in Llandudno, Wales, with photos of North Wales and Newcastle (I have unfortunately forgotten the photographer’s name.) The Welsh pictures were of places that I knew along the North Wales coast and they were taken in such a way as to give a film-noir way of seeing these places. I found that very exciting. I could see now how I didn’t need to set my stories anywhere exotic – I could just change the way I saw the places I knew. The Mostyn also had an Edward Hopper exhibition in those days, and I even worked there for a while in 1982 when they hosted an exhibition of National Film Board of Canada animations which I also found particularly interesting.

Mauretania and the other stories of A New World are set in a not-so-far-in-the-future Great Britain, suspended between bucolic landscapes, outdated technology and a sleepy society. How much of Great Britain is present in these stories?
Possibly I was hiding from 1980’s Britain. I could escape to that other version of the place and be in a bubble of my own invention.
The comics were a refuge but I could not earn money from them. They earned back their costs but that was as far as it went. I wasn’t even sure that the big stars of comics earned their living from their personal comics. They all seemed to have some other work going on like illustration or book design. I don’t claim to have much interest in art beyond its use as an effective way for me to tell my stories, and so I didn’t want that. (Paul Harvey, now  a famous painter, is dismayed!) So then I thought – what can my source of income be? And what it turned out to be was working with autistic and disabled people. And so that’s what I did.

Your storytelling is striking and peculiar: your cartoons look like lithography, you use a lot of black and white, the characters are often turning their back to the reader and the panels are divided by huge white spaces and strong, thick black lines. What did you want to express with these choices? An impossibility of humans to understand (and communicate with) each other?
When I was sitting at the Tunué booth at the Piu libri piu liberi book fair, the book on the counter next to my Un Mondo Nuovo was by Walt Whitman. Some of the poems in that volume were in English and so I was able to appreciate them fully. I had never read his work before. In in that space I felt somehow that all the books around me and all the other artists and writers were really trying to express very much the same thing. I have only recently returned from there and I am still in the sense of being surrounded by ideas and so it is difficult for me to separate my own thoughts at present!

Another recurring choice is the alternation between scenes with silent characters and then scenes of landscapes full of texts and thought that are filling the whole atmosphere. Also in this decision I perceived a reflection on the impossibility of men to openly communicate with each other and the escape in the nature to find a way of free expression. What does nature represent for you and where are those beautiful landscapes coming from?
I have not had this pointed out to me before. This is a good observation, such as one that Seth would make: that the stories only happen in the open space where there is no-one, rather than when the characters are present. I am going to think about this some more!

To the beauty of nature is opposed the world of men, full of often useless technology, outdated and surpassed, a reminiscence of a time when men was the center of all. How do you judge the technological development and what do you think your comics can say about this topic right now, in a world in which the brightest dreams (and the most terrible nightmares) of sci-fi are getting more and more real as the time goes by?
There is a lot of useless technology. One of the worst is targeted-ads on the internet. “Is that who they think I am,” you think. On Outlook Express I suddenly found I was being served adverts about buying a funeral plan – “Get ready for DEATH, Chris,” almost! So I adjusted my birth date from 1960 to 1980!
But there are other things. I was reading an interview with the sculptor David Nash, who is local to where I grew up in Wales. He said, somewhat depressingly, that he doesn’t see the magic in the hillsides anymore. Walt Whitman claimed (from Wikipedia) that “After years of competing for ‘the usual rewards’, I determined to become a poet.” I believe that this is an important step to take in life. Not necessarily to become a poet but to cultivate your own internal life in the face of what the internet and the media and even our friends think we should be thinking about. There is the dull view of the world and there is the sparkling one.

Monitor is your most famous character, and in a New World we see a boy who wants to imitate him and become like him. Who is Monitor and why is he hiding his face to the world?
There is a secret plan for a development of Monitor as a character, but I’m not ready to talk about it yet!

What’s in the future of Chris Reynolds? Do you have new stories from the same universe or it is time for you to change and do something different?
I have recently made some comics where the original version is not in English. This is because I want to introduce myself to a new way of thinking about what I am doing by going via the additional step of writing for translation. It’s an experiment and I will return eventually to scripting in English, but I wonder what I will bring back from the experiment! The comics so far are Scendere in Italian and Seefestung in German. Seefestung2 is what I am working on at present.

Thanks a lot for your time Chris and hope to see you soon!

Interview realized via e-mail in December 2019 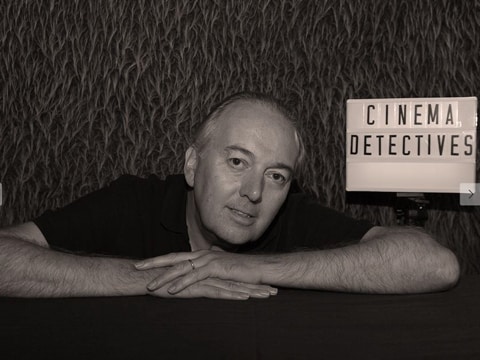 Chris Reynolds, born in 1960 in Wales, has been defined by Seth as “the most underrated cartoonist of the last 20 years”. HE has been active in comics since the mid ‘80s, when he started publishing on Escape Magazine, created by Paul Gravett and Peter Stanbury. In 1986 he, together with Paul Harvey, started to published Mauritania Comics, that were published for many years and finally collected in a book by Penguin in 1990. After the publication of The Dial and other Stories in 2004, Seth curated the definitive collection of Reynolds work into A New World: Comics from Mauretania from New York Review Comics. 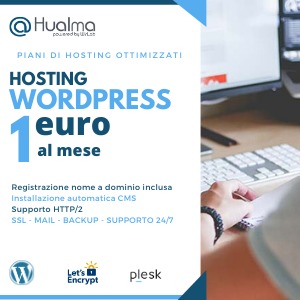